“I particularly like how Claggett uses the various facets of a storm to describe her lead Bonnie’s life and growth…STORMCHASER is an example of compelling short film storytelling.” – Film Threat

“Breathtaking cinematography combined with Mary Birdsong‘s performance makes STORMCHASER an awesome first episode…Writer/Director Gretl Claggett has left this story with enough intrigue to go in any direction she wants. You can see why it’s won awards…STORMCHASER will easily blow you away.” – Reel News Daily

“Mixing drama and dark humor is a difficult task, but Gretl Claggett almost makes it look easy here…The pilot for STORMCHASER strikes an engaging chord with dark humor, a fun premise, and solid performances. Chase it.” – Kevin The Critic

“What most impressed me about this film was how Claggett packs so many different genres into the 27-minute runtime of STORMCHASER and pulls it off so successfully.” – Project-Nerd

“A film about the inner and outer storms that menace our society, Stormchaser threads the needle of the personal and political in every breathtaking frame.” – Jacob Krueger, Jacob Krueger Studio 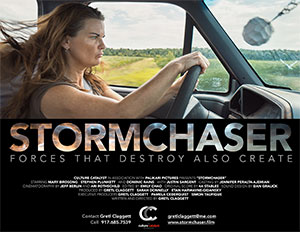 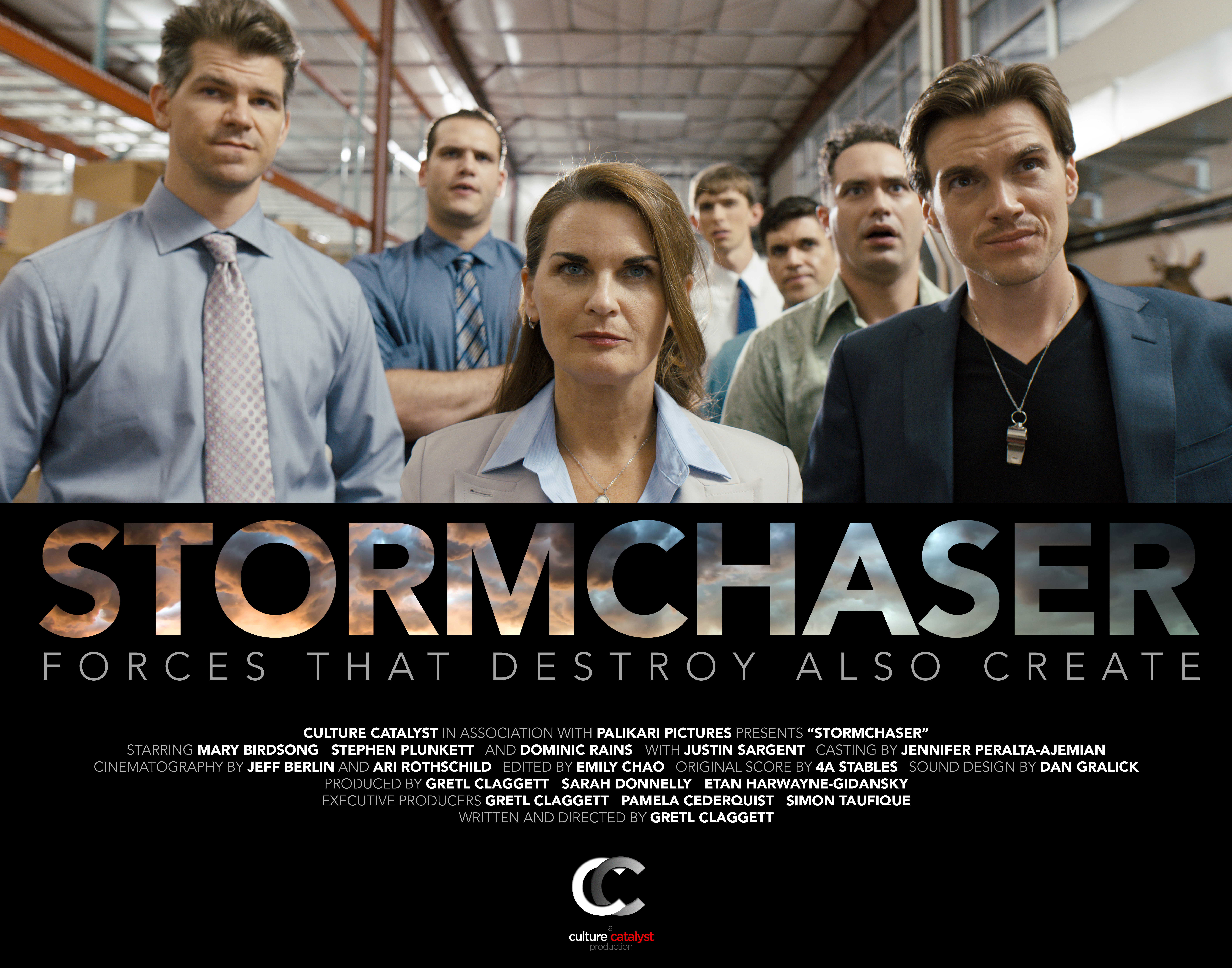 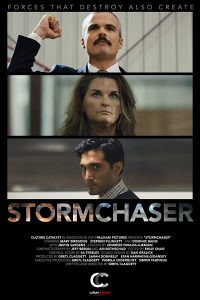 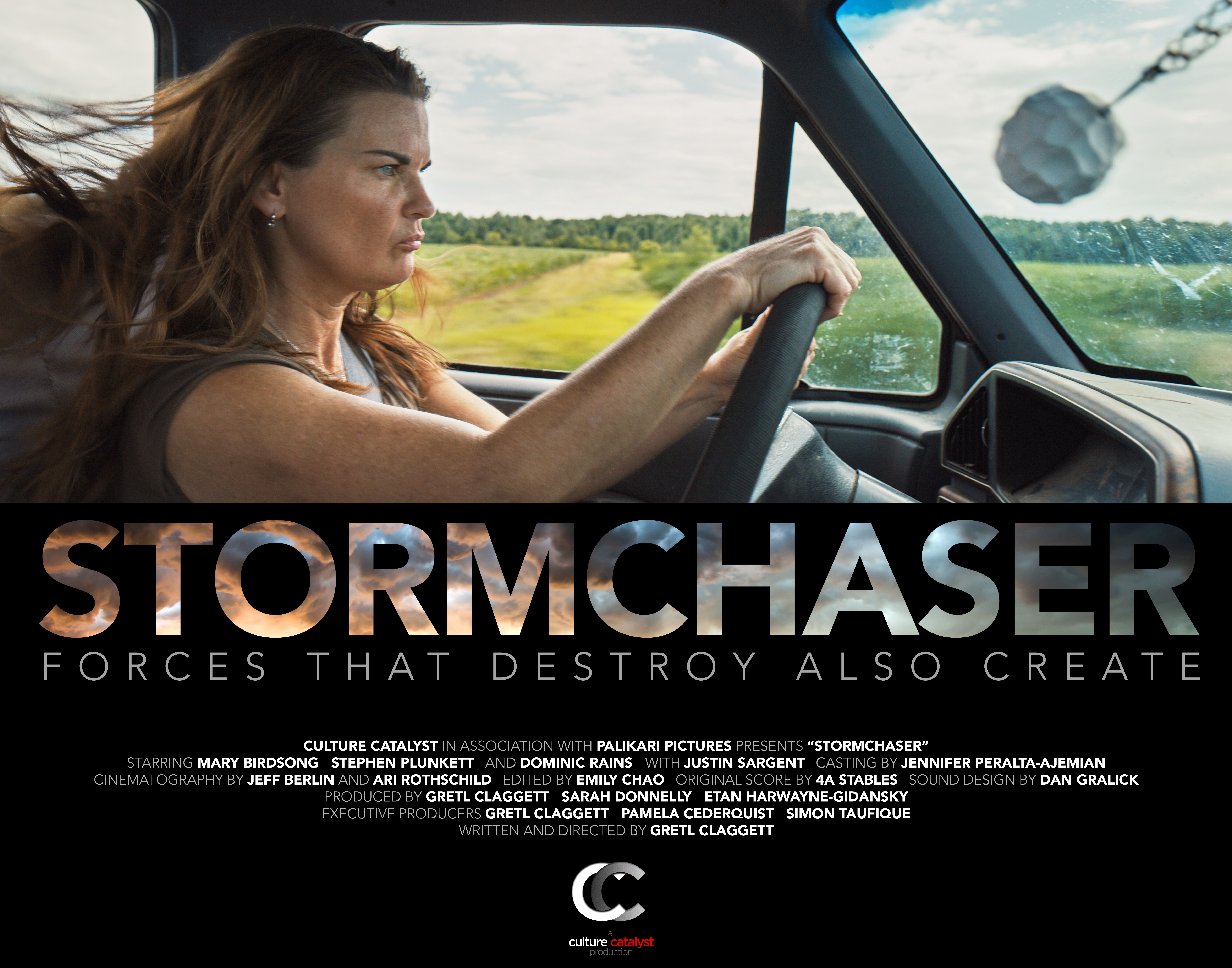 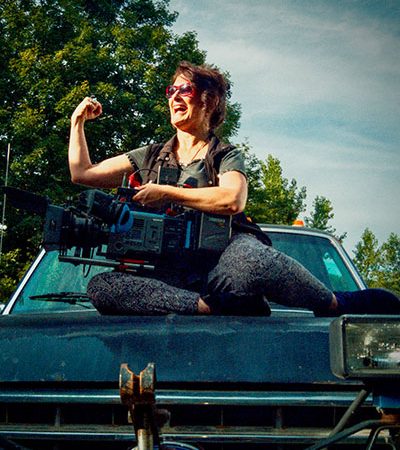 “A what…?” I thought I’d misheard what her new boyfriend did for a living.

“He lost his job. Now, he sells storm doors, door-to-door.”

Our exchange conjured black-and-white images from the Maysles’ documentary, Salesman, about door-to-door bible peddlers in the ‘60s. Surely, this daily grind was a thing of the past. But as I did some digging, I discovered it still exists; and that many contractors targeting weather-torn areas this way are called “storm chasers” — instead of “ambulance chasers” — because of their predatory practices.

This triggered a deep compulsion in me to express my own sardonic commentary on what I’ve experienced growing up in small-town Tornado Alley, plus selling incentives as the lone woman in an old-boys’ club: America’s culture of greed, its celebration of bad behavior, and the rise of “disaster capitalism” which preys upon the most vulnerable suffering from man-made and natural catastrophes.

We shot STORMCHASER in a visually epic style with Sony CineAlta VENICE Cameras and Sigma Cine Lenses — the first truly indie team to use this killer combination. Company 3 color-graded the 4K film, and will sponsor a High Dynamic Range (HDR) version. HDR will give us a wider palette to further emphasize the grimy, makeshift, claustrophobic office interiors versus the expansive, weathered, brooding-sky exteriors — merging the story’s real and metaphoric storms.

Magical Realism is sparingly interspersed throughout the film to physicalize the characters’ internal landscapes. There are scenes in which characters, themselves, become “the storm.” These moments — that break free from the more realistic narrative — hopefully engender intimacy with the characters’ psychologies, compress and accelerate action, as well as heighten dilemmas so they can be felt personally, politically and universally.

“Tell all the Truth but tell it slant,” wrote Emily Dickinson. To me, that means we can more easily face the world’s toughest problems when storytelling and performances are not on the nose. Acting was my first passion, and I loved collaborating with this cast. Each one of them authentically embodies their characters, skillfully playing that razor’s edge between nuanced farce and heartfelt, gritty naturalism.

My intention is for audiences to experience STORMCHASER as entertainment; but process it as a satire of our socio-political system — a darkly funny dramedy with a dash of romance and allegory: Flip Smyth epitomizes the Old ‘Merica and culture of entitlement. Don Stuckey, a dark-skinned man in a white man’s world, like far too many employees, lives in fear of losing his joyless job. And, Bonnie Blue, our anti-heroine, who really wants to pursue her passion for chasing storms, but — to make ends meet — finds herself preying upon the very vulnerabilities that are preyed upon within her. She, along with Don, represents the changing face and values of a New America struggling to find its way.

One only has to follow the news — global warming, disaster capitalism, Trump, #MeToo, a country divided, shrinking middle class, recession clouds looming — to see the consequences of a violent, predatory society. But STORMCHASER aims to explore these inflammatory issues without becoming a political polemic by looking at both the noble ambitions and dog-eat-dog urges that make people so damn complicated, asking: How do we stop the storm of violence in a culture where we’re all complicit — even when we’re oppressed by forces that seem so much larger than ourselves?

4A STABLES is a musical trio — Jeremy Benson, Colin Ryan and Rob Lombardo — based in Brooklyn, NY. The three have played together in rock, folk, indie and avant-garde bands for more than a decade, making records and touring the country. They compose and record cinematic music with unconventional instrumentation, arrangements, and production, aiming for strange and pretty, eclectic but accessible music where mood trumps meaning. All three members are multi-instrumentalists and producers lucky to be part of a large collaborative family of musicians, whose wildly different artistic orientations pump a variety of sounds, textures, rhythms and tones into 4A Stables’ projects.
Download “The Chase” for free.

Listen to "My First Tornado"

by 4A Stables | Stormchaser Soundtrack

KUCI GET THE FUNK OUT INTERVIEW